With just 92 days until the release of Pokémon Scarlet and Pokémon Violet, fans of the franchise are clinging to every detail they can get. As this is their official first open-world game, The Pokémon Company is keeping a tight lid on information.

When the Pokédex is complete, the franchise will pass 1,000 unique Pokémon. With that in mind, fans are excited to see what Pokemon #1000 will be. I hope it’s something really special, and they don’t just glaze over this insane milestone.

What’s interesting is the Terastal Phonemon. Select Pokémon gain a crystallized form. What benefits and bonuses that brings remain to be seen. Considering the toughness of Crystal, there is a good chance that this will include a defensive boost.

One noticeable missing detail is information on the evolved forms of the starter Pokémon. Historically, that information has been revealed to us by this point.

While anxiously awaiting news, I decided to speculate on what types they could be.

This Grass Cat Pokémon will no doubt bring a unique personality when the anime arrives in the region.

While fans are waiting on the evolved form, considering the description, one has to wonder if the final form will have a Fairy type. Fighting is also an option if they choose to model the final form after big cats. Poison could also be a fit and use the claws.

With nothing more than pictures and a gut feeling, I’m leaning toward Fairy being my best guess as to its future type. 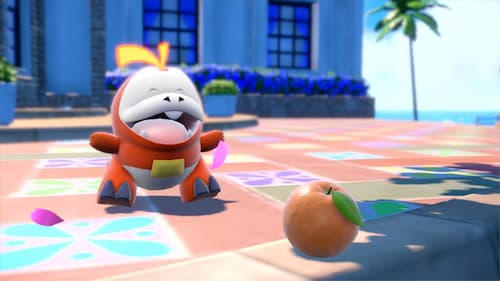 The fire starter is a Fire Croc Pokémon. Not since the days of Munchlax have there been a food-obsessed Pokémon.

Ground would be a solid option, but so would water. Both represent aspects of crocodiles. Fighting is an outside option, but with their habit of making the Fire type have Fighting in later evolutionary forms, fans are hoping they shy away from that option. I count myself among them.

Another idea is based on the Spanish legend of Cocollona. If this is the case, Ghost could be an option as well.

The final of the three starters is a Duckling Pokémon, Quaxly. Like its grass and fire counterparts, very little is known about it. Steel is an option for the final evolution, considering the sheen of the top of the head.

Quaxly could also lend itself to Psychic or Dark. Perhaps Pokémon will pay homage to Darkwing Duck in this final form.  The obvious answer is flying, but I’m hoping they shy away from that often used typing and give us something different.

Hopefully, Pokémon will be forthcoming and start to give us a bit more information. Some fans depend on this news to begin to build their teams. Personally, I’m more of an indecisive “Wait til I start and then pick one” kind of player.

I have to know. What types do you suspect the final forms will be? The suspense is real!!! Let me know your thoughts on our Discord! I’d love to chat about it with you!

One thought on “Boss Rush Banter: What are the Final Forms of the Paldean Starters?”

Gamer, nerd, bookworm, and writer. View all posts by girlinpink44