Shane Kelley: So, Kirby has never been on my must buy or even my must play list. I played the original Kirby from the NES as well as the titles on SNES, and I considered them “okay” games. The last Kirby game I purchased and played with my own money was Kirby 64: The Crystal Shards on N64 back in 2000, which I enjoyed the implementation of the combination of powers feature, but never truly told anyone it was a must play or hyped it up in my gaming circle. This now changes for me with the release of Kirby and the Forgotten Land.

At first, I was uncertain if I should pick up this game, and when I won a copy from the amazing Pow Block Podcast, I was both shocked and deeply surprised at how much has changed from the last time I immersed myself in a Kirby game. The crisp color, catchy soundtrack, tight controls, and fun RPG elements really have come together and made an enjoyable experience. The introduction to upgrade your abilities as you progress and save Waddle Dees is robust, and the new mouthful mode is impressive. I played a level where you become a circle and you use wind gusts to steer around a boat, which felt so clean and enjoyable to maneuver. The town that you must rebuild seems to progress the Kirby franchise forward into a new type of game but does not compromise what people love about past games. This really builds on the Kirby lore and delivers a positive experience.

The inclusion of both a Spring Breeze mode, which has less aggressive enemies, and Wild mode, which offers the normal playthrough experience were something I didn’t fully expect. Also, having Bandana Waddle Dee as a drop in and drop out second player was a nice touch. The fact that this game makes me want to play multiple times in a level is great game design and really promotes healthy replay value. My five-year-old kid loved the game as much as my wife and I, which also indicates the importance of intricate game design elements that allow all different people to enjoy and participate in a game.

I highly recommend that you go out and pick up this game or at least sample the demo and see for yourself the changes that were implemented. This fresh coat of pink paint has really ballooned my interest in this franchise, and I can’t wait to continue playing and save all the Waddle Dees.

Stephanie Klimov: Like Shane, Kirby was not high on my top Nintendo franchises I love. The last Kirby game I played was also Kirby 64: The Crystal Shards. Although the game was fun, the snail-paced slug through the side-scrolling world grew old quickly. On one hand it was too easy, and on another, it felt obtuse to the point where I didn’t even finish the game. So, when the Kirby and The Forgotten Land trailer launched at the September 2021 Nintendo Direct, I was excited–for everyone else. However, all this changed when a humble demo dropped.

The demo has since convinced me to pick up the latest Kirby title day one. First and foremost, the graphics and color palette were gorgeous and vivid–perfect for a Switch OLED. Even though the world you play through is technically an apocalyptic world, it’s still got that cheery vibe that is pleasing to the eye. The music was quintessential Kirby: bouncy, light, and catchy.

The controls and game mechanics were clear and easy. You can jump and float to a certain height, and per usual, you can suck up enemies and absorb your powers. Although I cringe at the name “Mouthful Mode”, I do have to admit it does provide additional mechanics that keep this franchise from becoming stale. There are several opportunities to utilize Mouthful Mode including driving a vehicle, shooting cans from a vending machine, piercing cracks as a traffic cone (it’s more satisfying than it sounds), and shuffling a file cabinet/locker to reveal clues.

I enjoyed upgrading my abilities, and I do see myself re-playing levels to complete all the challenges. The co-op mode was also a blast, and an easy option for friends and family to hop in and out of the game with ease. Lastly, there are little collectables within the game–figurines of various characters or aspects of the game. I doesn’t hold much value per sé, but it was a cute little add.

Overall, I can’t speak highly enough of Kirby and The Forgotten Land. If I were to be completely honest, I can’t think of anything wrong with the game so far. I was pleasantly surprised by this release, and even if you aren’t a Kirby fan, I feel that most people who check out the demo would be impressed. This is a delightful title that can be experienced by gamers of all ages. Nintendo has struck again at giving a fresh take on a long-standing series.

Mark Pereira: Will the Nintendo Switch go down in history as the console that revolutionized almost all of their major IPs? We have had Breath of the Wild; Super Mario Odyssey; Metroid Dread; Pokémon Legends: Arceus, Mario Kart 8 Deluxe, and Super Smash Bros. Ultimate. Each one of these games took what worked about previous installments and improved upon them in every imaginable way to create the seminal experience in their respective series. Not only that, they also made the games infinitely more playable and accessible for people who have not previously been fans of the franchises, as was the case for me with Metroid Dread and Pokémon Legends. And, I’m very happy to say, Kirby and the Forgotten Land has done the exact same thing.

There is a level of polish here that has been missing from previous Kirby games, and it shows. Yes, Nintendo has some wacky ideas and that signature Kirby charm is here in full force, but what I’m surprised about the most is the level of restraint that is shown in Kirby and the Forgotten Land. Previous Kirby games have thrown in mechanic after mechanic and loud noises and bright colors to try and deliver new gameplay experiences, and it is often a result of way too much stuffed into a game. Yet, with Kirby and the Forgotten Land, developer HAL Laboratory took a less is more approach, allowing what they included in the final product to really have room and space to shine.

Kirby and the Forgotten Land is an absolute joy to play. HAL Laboratory took a page out of the Mario playbook by introducing a new mechanic at the beginning of a level, providing some new challenges to use that mechanic’s specific hook, and then ending the level before it has overstayed its welcome. It works wonderfully for Mario, and the same can be said for Kirby. The design is also some of the best we’ve seen on the Nintendo Switch yet. Beautiful locations, vibrant colors, and some of the most adorable and lively character animations I’ve ever seen in a game come together in an absolutely stellar package. Plus, the logo design in this game is top notch (a small detail, but this advertising executive absolutely loved it).

I’ve enjoyed previous Kirby games in the past, but quit them after an hour or so. That is not the case with Kirby and the Forgotten Land–I can’t wait to keep playing and see what the little pink puffball has in store for me next.

Dan Colonna: While Kirby and the Forgotten Land can be a joy-filled experience for solo players, couch co-op is encouraged! Player 2 takes on the role of Bandanna Waddle Dee. By no means is this a downgrade from playing as Kirby. In fact, I consider it just as fun! Player 1 can enjoy stealing enemy powers while Bandanna Waddle Dee has an exclusive moveset! Wielding the second controller offers a chance at swinging and tossing spears in ways that Kirby could never imagine.

Couch co-op has been making a wonderful return to center stage, and Kirby and the Forgotten Land is just another great example of that movement. Bandanna Waddle Dees rise up! 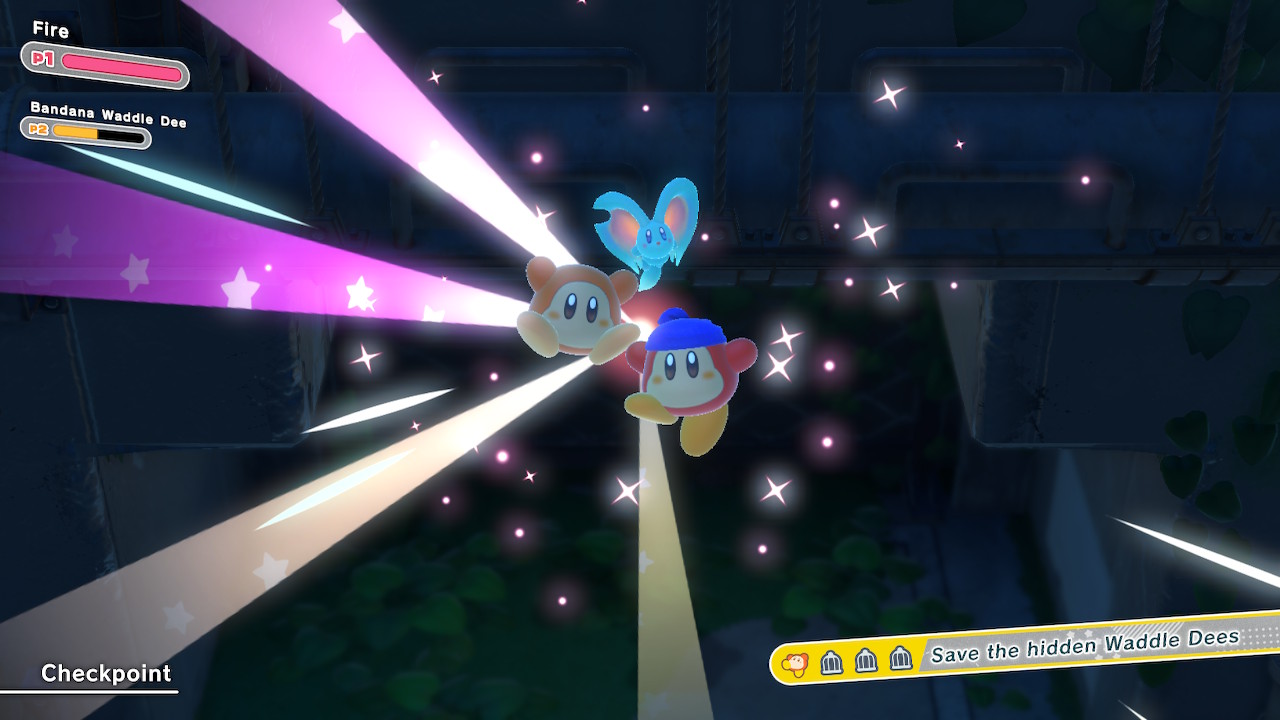 Dan Murphy: Kirby has been one of my forgotten franchises in Nintendo’s catalog, but after playing Kirby and the Forgotten Land, I’m ready to make the adorable pink puff ball part of Nintendo’s elite. As Mark said, Nintendo seems to be reinventing the wheel with all of their famous franchises, and Kirby has been no exception.

Kirby has mostly been a 2D platforming series where (in my opinion) the games become stale after only a few hours, but Kirby and the Forgotten Land has flipped that script and given new 3D life to each level and world. The world setup and levels feel similar to the way Super Mario 3D World is set up where you’re able to roam freely through an overworld and pick your level while completing multiple challenges. Having these challenges gives your levels great replay value as well. The gameplay loop and level design are both incredibly entertaining and make you want to keep playing.

Outside of the wonderful levels, you can rebuild Waddle Dee town by collecting Waddle Dees in each level. The more you rebuild the town, the more mini games you can play in the rebuilt town. So far I’ve gotten a memory-like café game and the battle coliseum which acts like a boss rush stage.

Overall, my experience has been positive with the latest Kirby installment. I never expected to purchase this game considering I haven’t enjoyed a single Kirby game since Kirby’s Dream Land for the GameBoy, but after playing the demo, I was all in with zero regrets. I’ve enjoyed the level design, the gameplay loop, the sickeningly adorable characters, the mini games, and the mini challenges. I recommend this game to anyone who needs a laid back, straight up fun platformer.

Have you tried Kirby and the Forgotten Land yet? Please share your thoughts with us on our Boss Rush Facebook or Discord Channel by clicking here or scanning the QR code below.

4 thoughts on “First Impressions: Kirby and The Forgotten Land”

Degrees in Multimedia and Digital Entertainment & Game Design! My passion with games started because of Nintendo! Writer & Engineer View all posts by Shane Kelley